Yesterday, during the i4cp webinar on Managing Talent Risk, I commented that it is time for competency models to be replaced with more targeted talent risk data that directly drives business (think: money, time, and quality). I have had several questions about my position on this subject so I am rerunning this blog post in case it is helpful. I would love your comments on the topic.

Here’s a quick business story illustrating just why HR competency models are inadequate when used to manage talent and guide change within a job role:

This month I was at a client site working with two senior leaders who are collectively responsible for manufacturing hundreds of millions of dollars’ worth of product in factories across Asia. They were trying to clarify their expectations of a job position in their Asian workforce that serves as a liaison between their design team headquartered in the U.S. and their outsourced factory operations in Asia. The leaders’ stated objective was to “change the culture” of the Liaison Team. They wanted Liaisons to “step up” their leadership of the creative process and “push back” more forcefully when designs received from the U.S. were too difficult to manufacture. They needed Liaisons to “take responsibility” for manufacturing deliverables and “say what they’d do and do what they’d said.” Can you see the problem?  The senior leaders had a vision for the end result they wanted—but little clarity about the expectations, behaviors, or skills needed to get the team there.

As a backdrop, more than seven years earlier the corporate HR team had introduced a competency model and these senior executives had adopted it as a standard. They had built their performance reviews around it and felt assured that the whole team was lined up behind the competencies. In fact, these executives had an upcoming half-day meeting planned with a group of 20 leaders from their division to “reset” the core competencies for the Liaison role. They figured that resetting the competencies would be one way to guide the Liaisons in the right direction. Just like the crowd oohing and ahhing over the emperor’s new clothes in the famous children’s fable, the whole team felt like they could “see the value” in this approach—even though it fell apart fairly quickly under a little scrutiny.

Where the Breakdown Occurs

Here is how the “naked emperor” was revealed: I stopped them and asked a simple question, “How does an updated list of competencies give clear direction for the changed behaviors you expect to see?” Seven years of lining up behind competencies crumbled under that one question. In reality, competency models afforded no markers of the desired performance change. There were no observable behaviors being explicitly stated to the Liaisons. They would have to settle for: “Please step it up in the Project Management competency and improve yourself in the Communication and Problem Solving competencies.”

Instead, I suggested that the senior leaders each take a general competency that they’ve worked with in the past (e.g. business acumen) and make a list of all of the “technical silos” (knowledge domains) where that competency would manifest itself. Then, they would be able to say exactly what behavior they expected in the context of the technical work the Liaisons were doing every day. Here is an example of what they came up with for one competency: 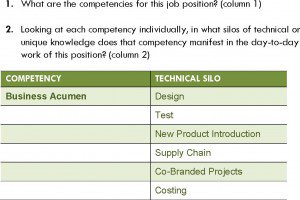 By calling out the technical silos where the competency would appear in the Liaison’s everyday work, the senior leaders now had a simple framework for drilling down on what changed behaviors they actually want to see from the Liaison role. They could drill down further by breaking each silo into the sum of its tasks and skills, and examining these for behaviors, skills, and unique knowledge either lacking in the Liaison Team, redundant, or trapped in only a few overtaxed individuals. In this way, senior leaders were able to get much more tactical about their expectations of Liaisons, giving much clearer direction for the reshaped position, and setting performance indicators along the way.

And—in case you haven’t guessed—this work is called knowledge transfer planning. The tool my team uses to begin it is called the Skill Development Plan.

How Competency Models and Knowledge Transfer Can Complement Each Other

I’m not suggesting you pitch all your competency models. Using a competency model in your decisions about hiring, promotions, and responsibility shifts can be an effective way to ensure that a worker has the raw capacity to do certain work in the first place. In this way, competency models can compliment knowledge transfer. After two decades spent guiding knowledge transfer throughout a broad range of industries and countless positions, I can confidently say that any expert’s knowledge and wisdom can be packaged and measurably transferred, so long as the apprentice coworker has the capacity to learn it. If you haven’t made a sound hire, or assigned a capable human resource to learn, knowledge transfer can’t fix that.

SUMMARY: Competency models can be a good tool for hiring workers with the right capacities, but don’t put your faith in a competency model as an active talent management effort. Unless your model includes clear expectations for skill development —in plain, tactical language—it will fall short. Rather than expect too much of competency models, apply a more fitting knowledge transfer approach.