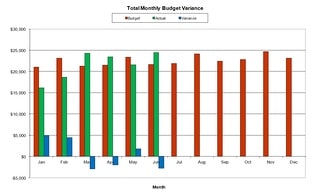 Our last blog post focused on reducing executive talent risk by modeling how to methodically transfer the “soft skills” necessary for a new job role. When coming to a new organization, executives also face similar challenges with getting their technical and operational skill sets up to speed. Take for example business planning and budget setting. I was with a client yesterday who is starting his next fiscal year budget six months in advance. Basically, they had barely finished getting the last one done, and they’re already moving on to the next. Much like the election cycle, knowing the timing of when and how to jockey for position is both incredibly complicated and incredibly important.

If you’re a VP (even one who only the got the job last week), it’s assumed that you already know how to do this. It’s taken for granted that if you did a budget at Microsoft, you can do a budget at Boeing. In my experience, that’s just not the case. There’s a system for “doing the budget,” and every company is unique. Sure, they all have themes that are the same, but you still have to learn how it works here.Using knowledge transfer, we can make this transition a little less bumpy. Tools such as the 20 Test Questions can be incredibly valuable to an executive. The tool allows them to clarify what they already know and ask very pointed question about what they need to know.  Here are some examples:

Test Question #3: What are the top 3 things that often go wrong when a new executive is working through a budget cycle?

Sample answers could include advice around timing, level of detail, how to present ideas, how to research etc.

Test Question #7: Who should be involved or consulted and why?

Sample answers could include a list of “internal influencers” that sometimes takes years to build but could be had for the asking.

Test Question #14: What standards or rules exist and how rigorously are they applied?

Sample answers could include a review of the template and guidance on exactly what is expected or a look at the calendar, learning how strict the deadlines are. Another rule might be around talking to vendors for input on the budget if they’re not on the “preferred” list (and how to get around that!).

Test Question #19: What are the relevant historical issues to consider?

Sample answers could include a look at the budgets of the last several years as they relate to market or other pressures. How should budget prep be viewed with the rear view mirror in mind?

Each of these questions is, of course, common sense but in the absence of a process to encourage the question, how many times does a new executive feel completely comfortable in asking?

It’s also of vital importance to get the right person to be the new executive’s expert. While some of their technical job skills should be learned from a person in accounting, some of the most critical skills may actually be more political ones that they’ll learn from a peer or even their own boss. Your organization should be direct and clear about the best resources for each of these important skills because if you’re not, you leave your new executive to guess and guessing is risky.  I was out for a run with a friend this week, and he just got a great promotion that will have him working with top finance executives around the world. He’ll be reviewing their work and giving them advice.

I asked him a simple question that stopped him in his tracks. I said, “They like you and promoted you so I guess you’ll just coach everyone in the way you learned to do the job in Seattle. Is there any chance your approach in Seattle is dead wrong for the exec you’ll meet in Munich?” In other words, “Your default is to see yourself as the expert. Is there any chance there is a better person out there who can guide you?” He can go back and ask this question of his boss before he jets off to Germany, but wouldn’t it have been better if the system was already coaching him along the way?

Summary: It is often taken for granted that skill sets at the executive level are interchangeable. That’s just not the case. Actively seeking the right expert to learn from and using tools like the 20 Test Questions will help executives transition into a new organizational culture with less time, less headache, and less risk to the enterprise as a whole.