How To Be Proactive vs. Reactive: Succession Planning

When it comes to succession planning, your organization can’t afford to be reactive. Every year, we see companies attempting executive and expert transitions without a solid succession plan in place, and these attempts cause predictable disruption within the organization and drops in stock value. 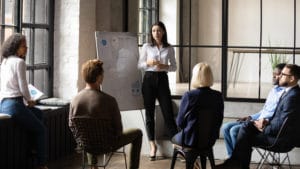 What is Reactive Succession?

Reactive succession is what happens when a company doesn’t have a succession plan in place, forcing them to scramble for a replacement when an expert or executive announces that they are going to be leaving the company. When this happens, the company board usually falls back on a shortlist approach to finding a successor.

The Danger of Reactive Succession Appointments

The potential pitfall with reactive succession methods (like the shortlist) is that they often result in a list of potential successors who are chosen because they are similar to the departing person. Not a lot of thought is given to whether or not a successor can actually fill the work role of the departee.

For example, if a departing executive has been with the company for 10 years, the shortlist is likely to include people who have also been with the company for 10 years. Or if the departing individual is charismatic and assertive, the shortlist will tend to be filled with similarly charismatic and assertive people.

Instead of asking, “What work does the departee do, and who else can do that?”, reactive succession tends to result in the company’s board nominating successors based on statements like, “Sarah is similar to Jim in personality.” Replacing the person and not the work being done is a sure way to lose faith with investors and cause disruptions in service or product quality.

The Advantages of Proactive Succession Planning

The most basic feature of a proactive succession strategy is planning ahead. Instead of postponing succession strategy until an expert announces their departure, you’re going to dedicate resources to preparing for it now so that you have a plan in place when they do eventually exit.

2. Cataloging the Work Your Expert/Exec Does

This ensures that you don’t simply replace the person, but that you track the work they do and find a replacement who can excel in that role. The only way to ensure you understand the exact tasks and work your target expert/exec does is to catalog it. This involves using some kind of matrix or spreadsheet system where you sit down with the potential departee and have them catalog every task they do for the company.

Another reason why it’s critical to track your departee’s work is that your board is likely unaware of the true scope of the work your expert/exec does. People tend to collect hats over the years, so if an individual has been with your company for many years, tasks from previous job titles have probably followed them to their current position. So instead of waiting until they depart to find out how big of a hole they’ll leave behind, you need to catalog their tasks and determine the size of that hole now.

To see an example of this kind of task-tracking system, here’s the Knowledge Silo Matrix used by our team.

Another key feature of proactive succession planning is being open to replacing a departing expert/exec with multiple successors if necessary.

If you’re replacing someone who has been promoted multiple times and been with the company for many years, it’s almost guaranteed that the scope of work they do exceeds their current job description. If this is the case, then it may be necessary to split their work between multiple successors.

For the companies, we create succession plans for, this often means appointing one successor to assume the vacant job title and the work tasks specific to that role. Work that falls outside the scope of that job description is shifted to other people — these could be new hires or people already inside the company.

Once you know who your successors are and have cataloged the departing expert/exec’s blocks of work and tasks, it’s time to begin training. It’s likely that successors won’t know how to fluently do all of the tasks the departee is responsible for. When this is the case, it’s necessary to organize structured learning sessions where your expert/exec can teach apprentices the necessary skills.

To learn about the fine-tuned knowledge transfer process our team has developed, click here.

Being proactive about succession planning enables you to announce an executive’s departure to stockholders with the assurance that, “We’ve been planning this step for years and have well-trained apprentices ready and waiting to step into the departing individual’s role.”

By planning well ahead of your expert and executive’s inevitable departure, you protect your company from disruption and ensure continued profitability and investor satisfaction.