What Mentors Can Do to Speed Knowledge Transfer 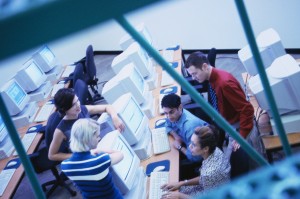 All of us in business learn our jobs by being on the job. No matter how much classroom education we may have had, we learn how to do our jobs by watching, listening to, and being mentored by the more experienced people around us. In fact, studies have shown that, regardless of occupation, most adults learn their job roles through 10% classroom training, 70% on-the-job training and mentoring, and 20% other sources (called the 70-20-10 Rule). If you are the experienced employee who is setting the on-the-job standard for the right way to do things in a job role (a mentor), knowledge transfer best practices can help you to help your apprentices speed their learning. At my consulting firm, we teach a workshop that trains Subject Matter Experts how to transfer knowledge to their apprentices quickly, clearly, and measurably, but whether you’ve taken that workshop or not, you can use the high level principles and quick conversation guides below to empower your apprentices and reduce the stress of the learning process.

Who Is Your Apprentice?

I think of someone as my apprentice if I hear job skill questions from them in one form or another more than once a day. You don’t have to overly formalize the role just because you’re fielding regular questions. But, if you’re consistently spending time training or supporting someone, that person is acting as your apprentice and you will want to spend both your energies well.

Apprentices can come from anywhere. They may have already been working in your company, but are new to your team. They may be new users of a technology you’ve mastered. They may be older than you. They may know more than you about other topics. They could even be your boss. The important characteristic is that you have knowledge they need to learn to do their job or an area of their job and they are coming to you to get it.

What Apprentices Want Most

Whatever an apprentice’s circumstances, all apprentices want two things: 1) to get the information they need to be successful, and 2) to do it as painlessly as possible.

How To Help Your Apprentices Succeed

First, you need a good plan for the knowledge transfer that will happen between you (and I’ve written extensively on this elsewhere). But also, as the mentor, spend five minutes thinking about simple ways you can help your apprentice along. What can you offer as suggestions for being successful and working with you?

One way to develop the advice you might give is to think about what your apprentice sometimes does that makes you crazy. Do any of these problems frustrate you?

Does that list sound about right? Keep going—I’m sure you have a few additional pet peeves, too. Once you make your own list of what doesn’t work for you (that is the easy part), make a list of what you actually want (this is a little harder).

Let’s take the first problem as an example. Don’t you hate it when your apprentice doesn’t listen? She glazes over, fidgets, or appears disinterested. Well, what are the behaviors of someone who appears to really be listening? It turns out people all do at least one of three things when they listen well, and you can frame a short conversation

Think about how many of your frustrations would be reduced if your apprentice did these three things consistently. Giving your apprentice a structure of how to learn in your company sets them up for successful knowledge transfer.

SUMMARY: Every apprentice wants an opportunity to be independent and do “real” work as soon as possible and with the least amount of learning stress. Every mentor wants the same thing. By communicating your expectations clearly, you set your apprentice up for success.